It was 1987. I was just entering the 7th grade and I was a sucker for everything Reebok and Gap. I was a tiny little yuppie in training. While my love for Ronald Reagan and hi-top aerobic sneakers in every color of the rainbow waned, my love of the Gap did not. I still love the Gap.

Does Andie not rock the denim on denim look? Swoon with the bandanna belt!

I’ve got this awesome vintage Gap denim shirt in the shop right now!

I would snap this boyfriend cardigan up in a hot second.

I spy some coral color love.

I love these relaxed pleated front black and white houndstooth plaid cotton pants from The Gap that I have listed in the shop.

Oh Joni, those pins on your jean jacket are just so perfect.

And we all need a little vintage Darryl Dixon love. In bell bottoms and a newsboy cap. You go, Norman Reedus! 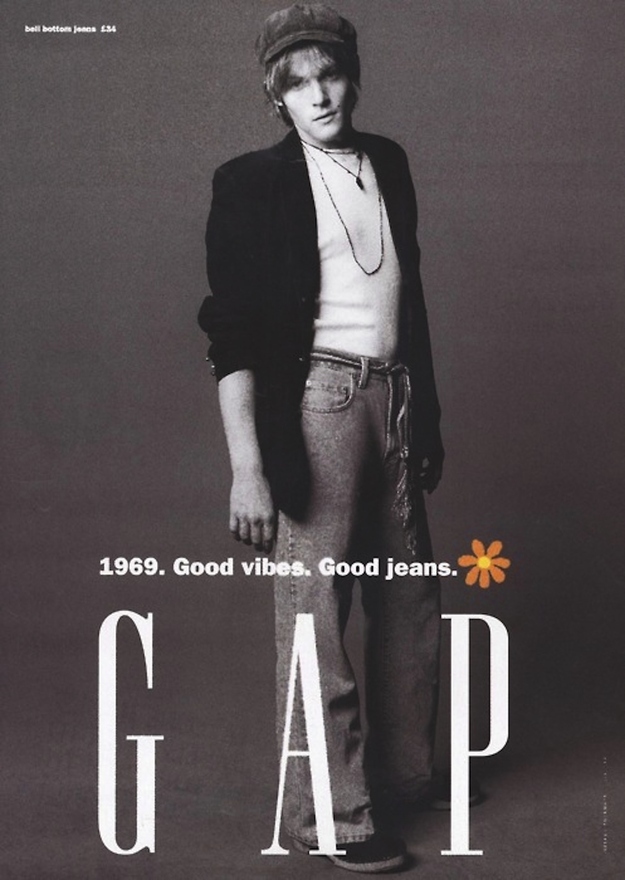 Dale of Norway have been making woolen products since 1879. Their classic cozy sweaters have been copied endlessly, but they’re the original Norwegian wool sweater. Over the years they’ve wafted in and out of style but in my humble opinion have always been a staple of classic like Pendleton.

Their products are made by hand and they’ve been the official supplier of sweaters for the Norwegian ski team and the winter Olympics since 1956. In fact, each Olympic season a special sweater is made and are considered collectible.

This morning on the way to work I heard Jack and Diane by John “Cougar” Mellencamp (side note, I’m so disappointed he doesn’t rock the “Cougar” anymore!). And for some reason I finally really heard the lyrics:

Jacky say “Hey Diane lets run off
Behind a shady tree”
Dribble off those Bobbie Brooks slacks
Let me do what I please.

I thought, HEY! I know that label! Turns out Bobbie Brooks isn’t really a person, just one of those ladies names that some company decided would make a good clothing wear label.

BOBBIE BROOKS, INC., was established in 1939 by Maurice Saltzman and Max Reiter as Ritmore Sportswear, Inc. in Cleveland, OH. Beginning with a $3,000 investment, they built the company into a multi-million dollar operation within the next 15 years. In 1953, Saltzman bought out Reiter’s share in the company for $1 million and the firm became Bobbie Brooks, Inc. Bobbie Brooks produced and sold stylish clothes for teenage and junior-miss girls, coordinating the styling, colors, and fabrics. Eventually, the company expanded its line to include apparel for women 25-44, and added production divisions in other cities during the 1960s.

The company filed for bankruptcy in Jan. 1982 and in 1986, Bobbie Brooks announced that it would stop making its junior and misses lines, in order to focus on clothing for women. It is now owned by Garan, and as of 2010, was carried in Dollar General stores. – via The Encyclopedia of Cleveland History and the Vintage Fashion Guild Label Resource

All That Jazz was a label out of California started in 1981 specializing in clothing such as dresses and jumpsuits. Today, All That Jazz items are one of the better labels with style that still comes off as it originally intended – cute and flirty!

When I found this super cute vintage dress, I immediately had to start looking up the label. Most of the time I don’t come up with much on these general kind of name labels. There’s so many of them and most have long lost the history of their origins. Every so often I’ll read a blog post out there that unearths some great grandchild of the legacy of a lable and I always find it fascinating. Check out my friend Lizzie’s blog The Vintage Traveler if you’re fond of historical stories about vintage. Especially her interview with Vera Neumann’s nephew and Enid Collin’s son. Both excellent reads!

Sadly, I don’t have the killer detective skills of Lizzie, but I do love vintage labels and researching them a little for my own curiosity. This time around I took a gander around for Carlette. Turns out Emmanuelle Khanh was one of the lines contributing designers. I’ve had another Khanh piece in my possession some years ago. That one was for Youthquake and included her name on the label, so we know it was her design.

Emmanuelle Khanh was born in Paris in 1937 and started in the fashion industry as a model for Balenciaga and Givenchy in the 50’s. She started designing ready-to-wear in the 60’s and collaborated with another ex-Balenciaga model, Christiane Bailly, to design their own groundbreaking Emmachristie collection in 1962. And Missoni in 1965 when she met Rosita on a trip to New York.

Sometime in the 60s she also did work for Youthquake, Cacharel, Krizia and our own little Carlette! I bet she even designed one or more of these great examples.

As the snow falls here in Upstate New York, I am really longing for Spring to just get here already! Laura Ashley designed florals and prints just always make me think of early Spring in an English Garden. And I really wish I was in one right now, sipping some Earl Grey and dreaming of Mr. Darcy. Swoon.

Laura Mountney Ashley (1925-1985) and husband Bernard Ashley started Ashley-Mountney Ltd in 1953 as a small screenprinting business that they ran from their home. They produced scarves and fabric kitchenwares such as placemats and towels. At first the business was located in London, then Kent, UK, but in 1961 they moved it to Carno, Wales, UK. By this time they were also making aprons and gardening smocks under the Laura Ashley name.

After the move to Wales, the company was able to expand, moving from the house to a larger building, with better printing machinery brought in. The first true Laura Ashley dresses were made in 1966. These dresses had a rural, old fashioned feel, and were right in step with the craze for nostalgia in dressing that came with the end of the 1960s. The dresses were made from the textiles printed by the company, and the designs were often modern interpretations of antique prints.

By 1970s, there was a string of Laura Ashley stores across the UK and the Continent, and the first store was opened in the US in San Francisco is 1974. By the 1990s there were 100s of stores worldwide.

Laura Ashley died in 1985, the result of an accident. By that time the company’s designs had come to be more in line with mainstream fashion, and they were producing a full line of women’s clothing. Still, floral dresses were a hallmark of the “Laura Ashley Look.” – Written by Lizzie Bramlett, fuzzylizzie.com via Vintage Fashion Guild Label Resource

Etsians have had a thing for vintage Etienne Aigner for awhile. It’s no wonder with the quality leather goods and great style. From shoes, bags and clothing Aigner covers it all with that sharp little A monogram.

Etienne Aigner (1904-2000) was an Hungarian maker of handbags and other leather goods He worked in France, producing leather goods for companies such as Dior, but came to the United States in 1949. He worked out of his apartment, producing belts in what became his trademark dark red color. He opened a showroom in 1959. – courtesy of the Vintage Fashion Guild Label Resource